GQ: The Democratic Party Is Waging a War Against Its Very Own Base

Check out Way to Win co-founder Tory Gavito’s article with Sean McElwee, co-founder of Data for Progress, below.

At a critical juncture before the 2020 elections, the leadership of the Democratic Party is, perplexingly, abandoning key constituencies of its base, including young people, women, and people of color, as well as the policies that fire them up. In chasing a narrow swath of white swing voters, the leadership has ignored a broader coalition of voters who have delivered blue victories time and time again. Not only that—at times, it’s actively antagonizing them.

Even though the multiracial coalition that re-elected Obama in 2012 and stayed home in 2016 was large enough to change the outcome of the election, the Democratic leadership has focused on voters who swung from Barack Obama to Donald Trump. Party leaders have also taken to kneecapping up-and-coming progressives. Earlier this year, the DCCC—the party’s House campaigns arm—announced that it will blacklist firms that work with primary challengers, despite their delivering exciting new talent, reflective of its base, like congresswomen Alexandria Ocasio-Cortez of New York and Ayanna Pressley of Massachusetts.

This has led them to positions at odds with the values of the Democratic electorate. In the very same week that Alabama passed a full-fledged abortion ban, in what appears to be a coordinated, Republican-led attack on women’s reproductive rights in several states, DCCC chairwoman Cheri Bustos planned a fundraiser for Illinois congressman Dan Lipinski, an anti-choice, anti-LGBT Democrat who opposed the Affordable Care Act and refused to endorse President Barack Obama in 2012. In his safe blue district, he faces a primary challenge from mainstream, pro-choice progressive Marie Newman, who lost many of her consultants after the DCCC announced its blacklist.

The backlash against the fundraiser for Lipinski—who supports abortion bans—was, predictably, swift and furious. Facing pressure, Bustos dropped out of it, but she had already signaled to the base that she valued incumbency over protecting a woman’s right to choose from the onslaught of right-wing attacks.

Bustos also made it clear that she sees the path to victory for Democrats in white swing voters, rather than in mobilizing the base of young voters and voters of color. She, along with other members in leadership like House Speaker Nancy Pelosi and House Majority Leader Steny Hoyer routinely undermine their colleagues’ bold initiatives, such as Medicare for All and the Green New Deal (though this may also be related to their acceptance of fossil-fuel industry donations), despite the popularity of these policies among Democratic voters. Leadership routinely says that they have to hold the “center” and “mainstream.”

Data for Progress, a think tank that studies public opinion and voter file data, analyzed the path forward for the Democratic Party, and the party could make big gains by a strategy that mobilizes progressives, rather than continuously undermining their base.

This orientation toward the middle instead of values and vision is demobilizing. Voters who are defined as “moderate” often hold a mix of extreme left and right positions. When the party machine prioritizes incumbents and moderates over its principles, voters become reluctant to identify as Democrats, and reluctant to vote.

Take, for example, the party’s treatment of black women. Black women are a powerful voting segment for the party, and yet they receive pennies to the dollar in resources spent by campaigns. They are three times more likely to die in childbirth than white women, and the current health-care system is failing this community, and yet this is seldom mentioned by Democratic candidates.

Resting on its civil rights–era support for black communities, the party is taking this community for granted. Now, the slip in black support for Democrats is beginning to show—voter file data from 2018 shows that black men, in particular, are increasingly identifying as independents. It’s not just black votes they have to worry about: The right has been working for a long time to make inroads among Latinx voters and hold power in the face of demographic change.

The results of demobilization are devastating. As the chart below shows, in four key states in 2016, there were more progressives who voted in 2012 and then stayed home in 2016 than the margin of victory in each state. Many of these voters are young people of color. 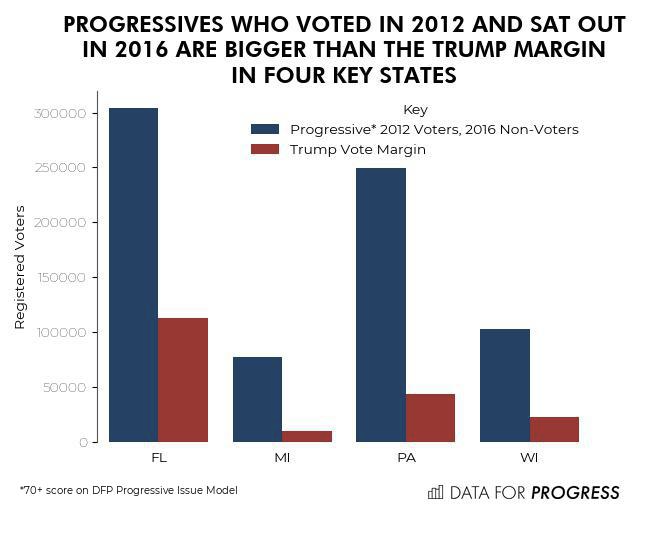 The valuation of white moderate voters—and so-called “electability”—over growing and reliable constituencies seems to have led the party to abandon areas where it could have won. The establishment’s hostility toward the Democratic base is not new. This tension was starkly represented by Bill Clinton’s third-way centrism, with legislation like the 1994 crime bill and financial deregulation. And despite that model’s defeat in key 2016 states, its adherents, like Joe Biden, continue to push it as the sole way forward. Biden’s campaign is based around the thesis that good old boys can sit down over beers and pass comprehensive climate legislation. It’s more absurd than anything the left has proposed.

The party’s neglect of the Democratic base is reflected in the rhetoric and strategy that it employs in determining its geographic investments, too. Democrats continue to ignore the south and southwestern states, underinvesting in places where demographics are actually the most advantageous. Take Texas. Ignoring Texas’s 38 electoral votes, especially after Democrat senate candidate Beto O’Rourke lost by a mere 2 points, in 2018, is an old-world view. Democrats lost Texas in 2018 by 200,000 votes in a state with more than 6 million eligible voters—people of color and young people—not voting concentrated in major cities. Texas is changing and Democrats can take it, if they have the imagination and the will to follow the data.

Instead, they look at past battles lost in Michigan, Pennsylvania, and Ohio. They argue that these are the important states on the path to 270 electoral college votes, insinuating that these populations are moderate and white. But even in the northern states, Democrats don’t get the base math right.

In Michigan, Democrats lost by 10,704 votes while over 4 million voters, counting both eligible registered Democratic and unregistered voters, were up for grabs. In 2016, Democrats failed to recognize that the turf in Michigan no longer looked like it did when Bill Clinton ran his 1996 reelection campaign, setting up field operations in neighborhoods that no longer existed. Consider the following data demonstrating that a multiracial coalition continues to be ignored by campaigns in traditional presidential battleground states, based on Data for Progress analysis of the Cooperative Congressional Election Studies 2016 survey. 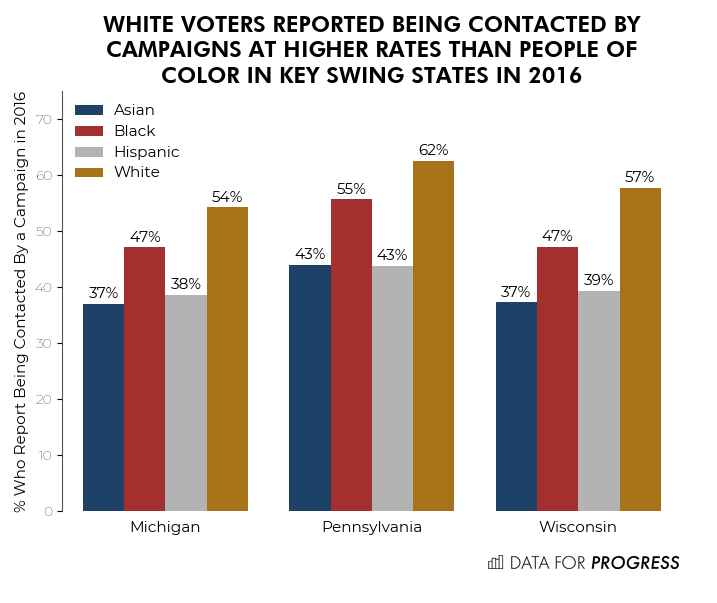 In contrast, when Democrats mobilize their base, they win. There is GA-06, which middle-of-the-road Jon Ossoff lost; congresswoman Lucy McBath won there by running a campaign on the issue of gun safety and embracing the new electorate. Or in TX-32, where congressman Colin Allred focused on mobilizing young people and people of color in addition to making the case for his values in the Dallas area, flipping his district for the first time in 15 years.

Stacey Abrams’s gubernatorial campaign in Georgia was an explicit attempt to expand the electorate. That strategy succeeded in bringing a Democrat the closest to victory in a Georgia gubernatorial race since 1998. But the campaign wasn’t starting from scratch. Abrams founded the New Georgia Project in 2014 with the explicit intention of mobilizing the black electorate in Georgia. That long-term work focused on the base will pay off.

Mobilizing the Democratic party base means standing up for progressive values, principles, and policies—and reaching out to the people it claims to represent. In the Data for Progress and YouGov Blue “What The Hell Happened” survey, we found overwhelming support among 2018 voters for policies like Medicare for All, the Green New Deal, and free college. And, in a recent report, Pew found that Gen X, Millennials, and Gen Z, turning 18 this cycle, are now a bigger voting block than Clinton’s cohort of boomers and older generations—together they outvoted older generations in the 2018 midterm elections.

The idea that the party needs to focus on the so-called center simply isn’t supported by data. The path forward for the Democratic Party is investing in the electorate of the future, not trying to win a smaller proportion of white voters that voted for Trump. This strategy will pay dividends for decades. Without a sharp pivot, Democrats risk again losing an entire generation of future Democrats who are disengaged and increasingly skeptical of the American political system.

Tory Gavito is President and Co-founder of Way to Win, a power network of donors and strategists upending politics as usual.

Sean McElwee is the co-founder of Data for Progress.