We are honored to share that Fast Company has named Riff City one of the World’s Most Innovative Companies.

We would not have earned this award without the innovations and perseverance of our partners, who tackle the most challenging issues facing our communities and planet. 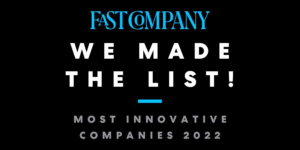 Riff City is building a different type of public relations and public affairs firm — focused on positive impact first, and profit second. If you need help building a movement or brand that can change the world, please reach out to us at: hello@riffcitystrategies.com.

Read more about our Fast Company recognition below!

“A decade ago, communications and advocacy firm Riff City Strategies helped launch Protect Our Defenders, a human-rights organization committed to curbing sexual violence in the military and reforming its justice system. In 2021, that advocacy came to fruition with new legislation with broad bipartisan support that overhauls the way the military prosecutes sexual assault. Last year, Riff City also helped the Donors of Color Network launch the Climate Justice Funders Pledge, which challenges the nation’s top funders to commit at least 30% of their climate funding to BIPOC-led environmental groups.”

San Francisco, CA — Riff City Strategies — the boutique agency of public relations and public affairs strategists trusted by many of the fastest-growing brands and social movements — was named to Fast Company’s prestigious annual list of the World’s Most Innovative Companies for 2022 (No. 5 in the “Small But Mighty” category). Led by Brian Purchia and Jess Montejano, communications chiefs and technology advisers for two former San Francisco mayors, Riff City is building a different type of public relations and public affairs firm that prioritizes positive impact over profit.

“Too many PR and public affairs firms are more concerned with increasing their bottom line than with the impact they’re having on society,” said Brian Purchia, CEO of Riff City Strategies. “Riff City takes on the most challenging issues facing our people and planet. We’re thrilled to be recognized by Fast Company along with our partners for building campaigns that are changing the world.”

Only 1.3 percent of U.S.-based philanthropic funding for climate goes to organizations led by people of color. Riff City was honored to help the Donors of Color Network launch the Climate Justice Funders Pledge, a world-changing climate justice campaign that challenges the nation’s top funders to commit at least 30% of their annual US climate funding to BIPOC-led organizations and to commit to greater transparency.

“We interviewed multiple ‘top’ PR agencies to help us launch the Donors of Color Network’s climate justice campaign. Many declined once they saw the funders and philanthropies our campaign planned to publicly engage. But not Riff City,” said Danielle Deane-Ryan, former senior advisor to the Donors of Color Network. “Riff City told us they thrive in David vs. Goliath battles and their advocacy and media efforts are helping to strengthen the movement so we can win on climate.”

Ten years ago, Riff City CEO Brian Purchia helped launch a new human rights organization, Protect Our Defenders. The goal: reform the Pentagon, the world’s largest employer, and combat the military’s longstanding sexual assault epidemic. Thanks to the tireless work of survivors and advocates, President Biden signed a landmark bipartisan law in December 2021 to empower independent military prosecutors to decide whether to prosecute those accused of sexual assault, murder, and domestic violence.

“Riff City has helped bring the most significant policy changes to the military justice system in history,” said Col. Don Christensen (ret.), former Chief Prosecutor of the U.S. Air Force and President of Protect Our Defenders. “Riff gives our troops and their families a voice, pressures elected leaders to support reform, and has brought the epidemic of sexual violence, victim retaliation and racism in the military out of the shadows and into the national spotlight.”

Riff City works with early-stage startups to multi-billion dollar businesses that aim to change our world for the better. The firm recently led longtime client Dutchie’s PR for their $350 million Series D, which earned them the distinction as the most valuable cannatech company at a $3.75 billion valuation.

“We trust Riff implicitly to help tell our story and the value we provide as we help propel one of the fastest-growing industries in the world forward,” said Ross Lipson, CEO and Co-Founder at Dutchie. “They are always available, flexible, strategic, and take it as a personal challenge to exceed the ambitious media goals we set out to achieve together. Riff is a vital part of our growth and future plans.”

Riff City’s ongoing work with progressive funders and strategists has also been paramount in building a more reflective, representative democracy. The San-Francisco based firm helped launch Way to Win in 2018 and hypercharged its media efforts. The homebase for progressive donors and organizers has moved more than $160 million since their founding to turn out voters of color, young people, and women in key swing states. Years of organizing with a visionary strategy to expand the electorate paid dividends, as record turnout among people of color helped turn “traditionally red” Arizona and Georgia blue and secured a Democratic Trifecta.

“Riff is a values-aligned, mission-driven partner who is a key force behind advancing our theory of change and strategies to build a truly reflective and representative multiracial, multigenerational democracy,” said Tory Gavito, Way to Win President and Co-Founder. “Since our launch, Riff has landed impactful media and opportunities with the biggest outlets in politics for Way to Win and our grantees.”

“The world is full of too many well-organized people and interests who profit off of the status quo,” said Jess Montejano, Sr. VP and COO at Riff City Strategies. “Our team never backs down from challenging systems of oppression while we pursue transformative change to help our partners tell stories and build movements that are changing the world.”

The World’s Most Innovative Companies is Fast Company’s signature franchise and one of its most highly anticipated editorial efforts of the year. It provides both a snapshot and a road map for the future of innovation across the most dynamic sectors of the economy.

“The world’s most innovative companies play an essential role in addressing the most pressing issues facing society, whether they’re fighting climate change by spurring decarbonization efforts, ameliorating the strain on supply chains, or helping us reconnect with one another over shared passions,” said Fast Company Deputy Editor David Lidsky.

Riff City is currently accepting new partners who need help building a movement or brand that can change the world, please reach out to us at: hello@riffcitystrategies.com.

About Riff City Strategies:
Riff City Strategies tells stories and builds movements to deliver results for our communities, the environment and the technology shaping our future. Our boutique agency of public relations and public affairs experts is trusted by many of the fastest growing brands and social movements. Riff City serves several private companies with valuations in the billions and is the trusted advisor for multiple racial and social justice organizations and funders who are fighting for a more equitable society. Fast Company named Riff City One of the World’s Most Innovative Companies for 2022. Inc. has also named Riff City one of the fastest-growing companies in California. Learn more at: riffcitystrategies.com.

Inc. Regionals 2022: Meet the 150 Economic All-Stars of the Pacific